The last big outdoor music festival of the year will now be the second such event to take over Hall’s Island near downtown Minneapolis this year.

Festival Palomino — the third annual eclectic rock and roots music fest helmed by Trampled by Turtles — will now be held in the riverfront park on Sept. 17, a change in locations from Canterbury Park in Shakopee.

The switch was purportedly made due to recent rain storms in the Shakopee area, which delayed construction of a new festival site inside the horse track. No doubt, Hall’s Island was also seen as an advantageous substitute, thanks to its central, accessible location and the good reception the park received as the host of Wilco’s concert two weekends ago with Kurt Vile.

“We’re incredibly thankful to the Minneapolis Park Board for allowing us to move to such a beautiful location,” First Avenue general manager Nate Kranz said in the club’s announcement. “While we love working with our partners at Canterbury Park, we both agreed it was in the best interest of the fans to move the festival this year.”

Nearly everything else about Festival Palomino will stay the same. Well, except for the chance to hit the card room to play blackjack or do some off-track betting, like at Canterbury. In addition to Trampled by Turtles — who haven’t played in town since last year’s festival — the Palomino 2016 lineup includes Dan Auerbach’s new-ish band the Arcs, Andrew Bird, Jake Bugg, Houndmouth, Frightened Rabbit, Elephant Revival, the Cactus Blossoms, Margaret Glaspy and many more spread over two main stages and a smaller third stage. Tickets are on sale for $52 general admission or $151 for VIP viawww.FestivalPalomino.com. 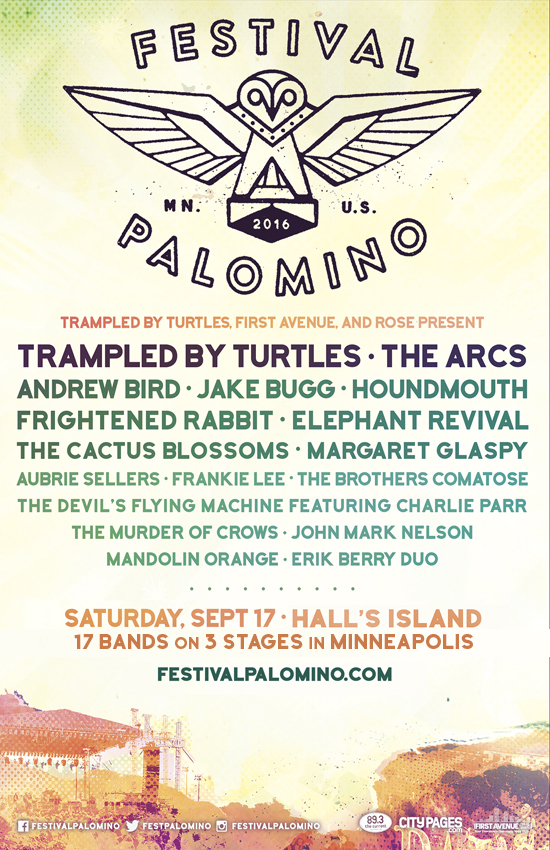