Proposed agreements are a win-win arrangement for the City of Minneapolis and park users.

The Minneapolis Park and Recreation Board (MPRB) and Graco Inc., a Minneapolis-based manufacturer of fluid handling equipment, have reached proposed agreements on the development of the riverfront park adjacent to Hall’s Island in northeast Minneapolis.

Separately, the Graco Foundation has announced its intention to donate more than $3 million to the MPRB to fund the development of the open space portion of the site, which will be named “Graco Park.” Along with Hall’s Island, Graco Park will be part of the Above the Falls Regional Park, which includes parkland on both the east and west banks of the Mississippi River and extends from the Plymouth Avenue Bridge north to the city limits.

On Oct. 3, the Minneapolis Park and Recreation Board Administration and Finance Committee will vote on a resolution related to several agreements between Graco and the MPRB. If approved, the MPRB full Board is anticipated to vote on the resolution on Oct. 17. These agreements signal Graco and the MPRB’s ongoing commitment to Minneapolis and serving the community for generations to come.

“This agreement with Graco allows the Park Board to build a world-class park that will return much needed green space along the river for everyone while also preserving the city’s ability to retain and attract jobs,” said Brad Bourn, MPRB President. 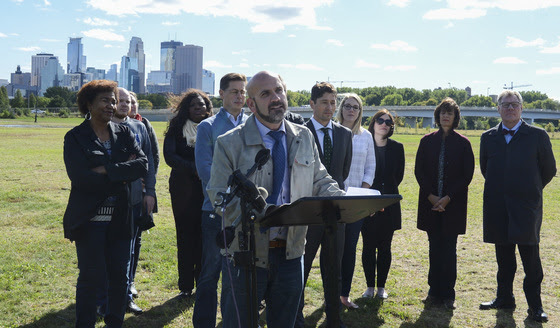 MPRB President Brad Bourn was joined by Superintendent Mary Merrill, Mayor Jacob Frey and leaders from Graco and the MPRB as he announced proposed agreements for a new riverfront park.

Included in the agreements, Graco will give the trail easement to the MPRB for free, the parties will end the legal proceedings related to the East Bank Trail easement and the MPRB will sell a 2.2-acre portion of the 3.55-acre Parcel D located next to Graco’s Riverside production facility to Graco at a fair market value of $1.1 million.

Of the 11-acre site, the 3.55 acres of Parcel D were purchased by the Park Board without state regional park dollars. At the time of the acquisition from Scherer Brothers Lumber Company in 2010, the Park Board, the City of Minneapolis and the Metropolitan Council all agreed that Parcel D would not become parkland and planned to instead use Parcel D for a public-private partnership of some kind.

Graco’s total financial commitment is valued at approximately $10.6 million, through a combination of release of its condemnation claim and related fees, prepayment of park dedication fees, payment for certain flood protection components to be constructed on Parcel D, payment to purchase part of Parcel D, and a donation from the Graco Foundation. Approximately $5 million from Graco and the Graco Foundation will be dedicated for the development of Graco Park and development of the MPRB’s 1.35-acre portion of Parcel D.

The contribution from Graco allows the public amenities to be constructed up to a decade earlier than they otherwise could. If the agreements are approved by the Minneapolis Park and Recreation Board Commissioners, it is anticipated all additional steps to finalize the agreements would be complete by the end of 2018. Pending finalization of all agreements, community engagement, final design, engineering and permitting for the park would take place in 2019, with construction in 2020-2021 and the park open to the public as soon as 2022.

“We are extremely pleased to assist financially in the development of this beautiful new park to be enjoyed by all community stakeholders, including Graco employees,” said Pat McHale, Graco’s President and CEO. “Graco has been committed to its Minneapolis operations for nearly 100 years, providing hundreds of great jobs with full benefits as well as donating tens of millions of dollars to worthy charities through the Graco Foundation. This agreement is an outstanding example of public and private cooperation, and we thank both the Park Board and the City of Minneapolis for their constructive work to achieve this result. While we have no immediate plans to build, having a park-oriented green space buffer between our industrial operations and Graco Park should be a positive outcome for all involved.”