When the North Loop’s new concert venue, The Fillmore, opens in February, it will start with six straight nights of music, beginning with an artist who took home three Grammy Awards in 2019.

Brandi Carlile will play for three consecutive nights at The Fillmore, February 12-14. After that, the new venue from Live Nation will bring in a diverse mix of hip hop, rock, alternative, electronic, blues and country artists.

The Fillmore is being built along 5th Street, adjacent to Target Field Station. 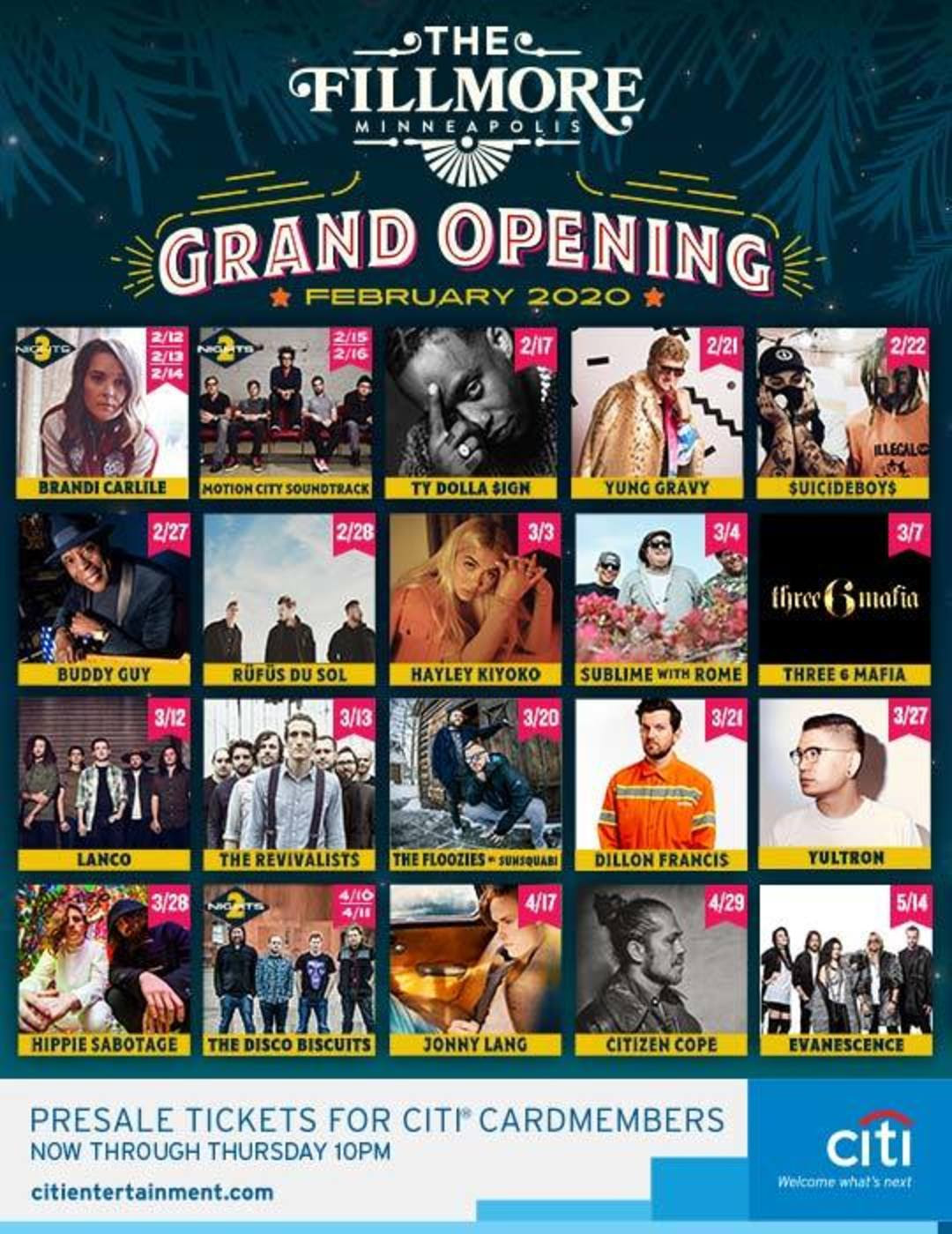 MINNEAPOLIS — Oct. 15, 2019 — The Fillmore Minneapolis announced its opening lineup of performers and concert dates today. The venue, currently under construction at 525 N. 5th Street in Minneapolis’s North Loop, will open Feb. 12, 2020, with a performance by Brandi Carlile, the first of three scheduled performances by the Grammy-winning singer-songwriter.

Tickets go on sale to the general public on Friday, October 18, through Ticketmaster.

The new 36,000-square-foot venue features two floors and an 1,850-person capacity. Box seats and premium tickets are on the venue’s mezzanine level alongside upscale food and beverage offerings and dedicated hospitality.  Throughout The Fillmore, concertgoers have myriad choices for dining, ranging from food and drinks on both levels, to enjoying craft beer, inventive cocktails and decadent shakes at the brand-new restaurant Trax Burgers and Bar, which opens next door in early February.

“We’re proud to announce an exciting and diverse list of artists for our opening lineup to the music-loving community of Minneapolis,” said Tamsen Preston, senior promoter. “The attention and time we’ve taken to invest in building something special and unique will all be worth it when fans experience their favorite artists inside this amazing new venue. The sound system we are putting in and the sight lines are really just incredible.”

The Fillmore Minneapolis expects to produce 175 annual concerts and events and is operated by Live Nation, a longtime promoter in the Twin Cities. Live Nation currently operates Varsity Theater in Dinkytown and has produced shows at Target Field, U.S. Bank Stadium, Xcel Energy Center, Target Center, The Armory and The Hennepin Theaters.

Fans can follow @FillmoreMPLS on Facebook, Twitter and Instagram to experience and engage with The Fillmore Minneapolis on social media. For more information on shows and other details about the new venue, visit fillmoreminneapolis.com.

Citi is the official presale credit card of The Fillmore Minneapolis. As such, Citi cardmembers will have access to purchase presale tickets beginning Tuesday, October 15, at noon until Thursday, October 17, at 10 p.m. local time through Citi EntertainmentSM. For complete presale details, visit citientertainment.com.

Tickets for all shows go on sale to the general public Friday, Oct. 18, at 10 a.m. CDT via fillmoreminneapolis.com, livenation.com, ticketmaster.com and in person at the Varsity Theater Box Office, 1308 SE 4th St, Minneapolis.