MINNEAPOLIS, MN (October 20, 2017) Traffic Zone Gallery presents Constructions, an exhibition of new work by Patrick Pryor. Ever intent on exploring the potentials for creativity and expression with painting and sculptural processes, Pryor’s new series of works demonstrates his findings. In these works, Pryor juxtaposes intuitive mark making and systematic patterns, layering and erasure. Just as Pryor’s new ventures into three-dimensional work entail processes of construction or building, so do his acrylic and graphite works on canvas. For his large paintings, Pryor’s current artist practice begins with intuitive mark and pattern making, which he outlines with tape. Over time, the paint he applies builds up along tape in slight relief creating a crisp edge. Pryor photographs the results and generates a digital file of that image. He then further manipulates the pattern digitally, or physically by cutting up transparencies of the digital file so he can use the same pattern to discover vastly different results. In the completed paintings, after the painted layers are sanded down, he applies graphite on top or highlights painted lines in a grey so they appear as drawn graphite lines.

Artist Statement
“Creating this strata of work and strata of material,” Pryor explains, “is like burying something, then unearthing it again. The process becomes one that is similar to archaeological discovery. While the focus of the creative process is a back and forth between intuition and a highly planned, structured arrangement of lines on the canvas,” he continues, “the sense of discovering something originally hidden from view, that represents a remnant or part of the history of the canvas, is what interests me.” Pryor’s sculptural works take their cues from his paintings. Using plaster, wood and graphite, he generates intuitive forms based on the paintings, transforming them into three-dimensional objects. Once again, he says, “the graphite lines, layers of paint and sanding to reveal remnants of the original lines is a celebratory part of my process. The sculptures are, then, another physical manifestation of the almost sculptural-like layering of paint that happens on my canvases.”

Artist Biography
Patrick Pryor works from a place of spontaneous intelligence. He generates bold statements that engage mind and heart by using color and gesture to explore abstract ideas of humor, beauty and absurdity. A former environmental engineer and science educator, he also draws from that experience by abstracting forms and patterns from the natural world. Site-specific installations of Pryor’s work have appeared in more than 140 locations in Minnesota and Canada. As an interdisciplinary collaborator he’s worked in film and video, and with dancers, other visual artists and fashion designers, including Christopher Straub from Project Runway. 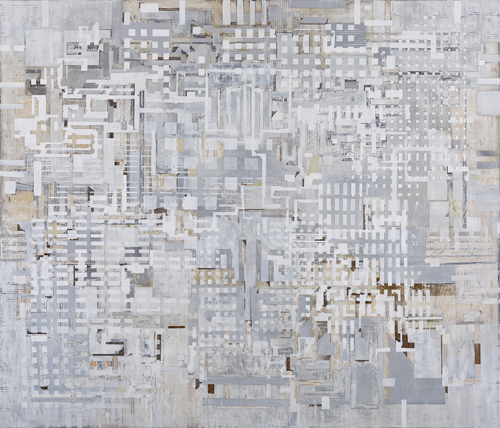