The Minneapolis Parks Foundation and Minneapolis Park and Recreation Board (MRPB) marked another important milestone in the Water Works riverfront park project yesterday, when MPRB Commissioners approved phase 1 schematic design and a Letter of Intent (LOI) with The Sioux Chef. These actions ensure that Water Works stays on course for its anticipated fall 2018 groundbreaking and 2019 grand opening.

Water Works is a park development project overlooking St. Anthony Falls and the Stone Arch Bridge. One of the signature projects in the RiverFirst vision, Water Works will bring visitor services and recreational and cultural amenities to one of Minnesota’s most highly-visited destinations.

The LOI with The Sioux Chef formalizes the parties’ intent to partner, announced last September, on the Water Works restaurant and event venue. The Sioux Chef is a diverse, Indigenous-led team committed to revitalizing Native American cuisine and reclaiming an important culinary tradition that has been long buried and often inaccessible. The restaurant’s working title will be Owamni: An Indigenous Kitchen and it will be the first year-round, full service food venue within the Minneapolis park system. In addition to the restaurant, The Sioux Chef plans to create events and educational opportunities to amplify diverse voices into a larger dialogue about Native American cultures, the river, and cuisine.

Water Works design development is being completed by Minneapolis-based Damon Farber Landscape Architects with HGA Architects and Engineers and a multidisciplinary team that also includes expertise in cultural resources, programming, and engineering.

The philanthropic community is largely funding the Water Works Mezzanine Phase with contributions to the RiverFirst Capital Campaign. To date, the Parks Foundation has raised $13.1 million to complete two signature river projects and anticipates raising the remaining $4.8 million by June 1, 2018.

The General Mills Foundation made the lead corporate contribution to RiverFirst in 2016, with a $3 million gift. More than a hundred individuals and companies have already joined General Mills in support of the campaign, including RBC Wealth Management and US Bank. Most recently, Target committed $150,000k to the RiverFirst Campaign in support of Water Works and new connections from North Minneapolis to the Mississippi River.

Campaign gifts of $100,000 or more are being matched by the Pohlad Family Foundation, though the Parks Foundation welcomes gifts of any size. Interested donors are encouraged to learn more about how to participate in this landmark campaign by visiting the Parks Foundation’s Major Gifts page on its website. 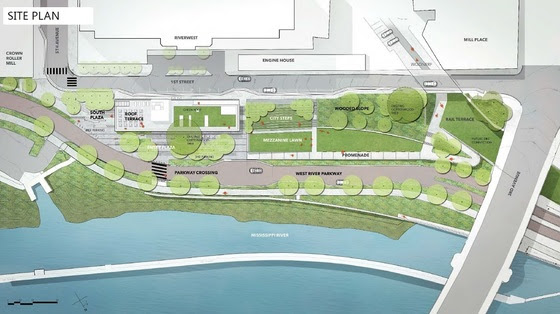 The schematic design illustrates what will be constructed within the Mezzanine Phase of the Water Works project and is an important step on the path to construction. In undergoing schematic design, the design team makes choices about project details while holding true to the intent, program, and quality originally envisioned.

The pavilion will include a green roof, meeting room, and the restaurant. On the park grounds, and adjacent to the pavilion, city steps will provide a place for contemplation and programming, while a south plaza will be a gateway to the Central Riverfront. The wooded hillside on the north end of the site will retain its character and be enhanced with native vegetation, including plants with edible or medicinal value, and a direct trail link into downtown promotes access and circulation.

The MPRB has begun preparing the Water Works site for its 2018 construction start. Selective deconstruction of the Fuji-Ya building began in October and will continue through February 2018. Large timbers from the building are being salvaged and will be repurposed in the stair and lobby area. Excavation of mill remnants that have been filled with soil and debris for over 80 years will begin next April.